the republic 1: do you still remember the soviet union?

07 9月 the republic 1: do you still remember the soviet union? 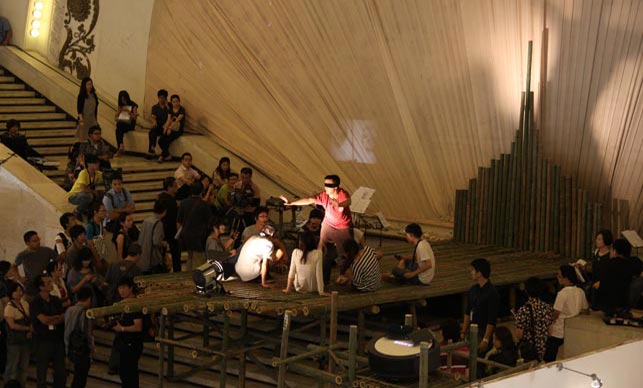 Students born in the late 80’s are asked about the meaning of ‘Soviet Union’ upon their visit of the Sino-Soviet Friendship Hall last week, the current venue of the SHContemporary. Seeking answers from their own families, including their parents and grandparents, the students went on to interweave the responses they got with elements in Plato’s The Republic, turning the site of a platform for not only a game of “hide and seek” but also debate.

The performances takes place on a stage constructed by bamboo with a form reminiscent of the styles of the 1950’s during which the building was erected. The floor of the stage could be seen as the shadow of this building, or the bow of a ship. Images of some old movies and posters of former Soviet Union will form the projection background for their installation.

The Republic is a long-last project of ‘Total Art Studio’ in China Academy of Art. The ‘TAT’ is a series of synthetical experiments with events, performances, videos, social investigation and social participation. The Republic 1: do you remember the Soviet Union? is not a sort of ideological reminiscence, but an archeological excavation at the current site of art market. For these students of art, the memory of S.U. is neither some style of sketch they have learned, nor just some image of a monument.