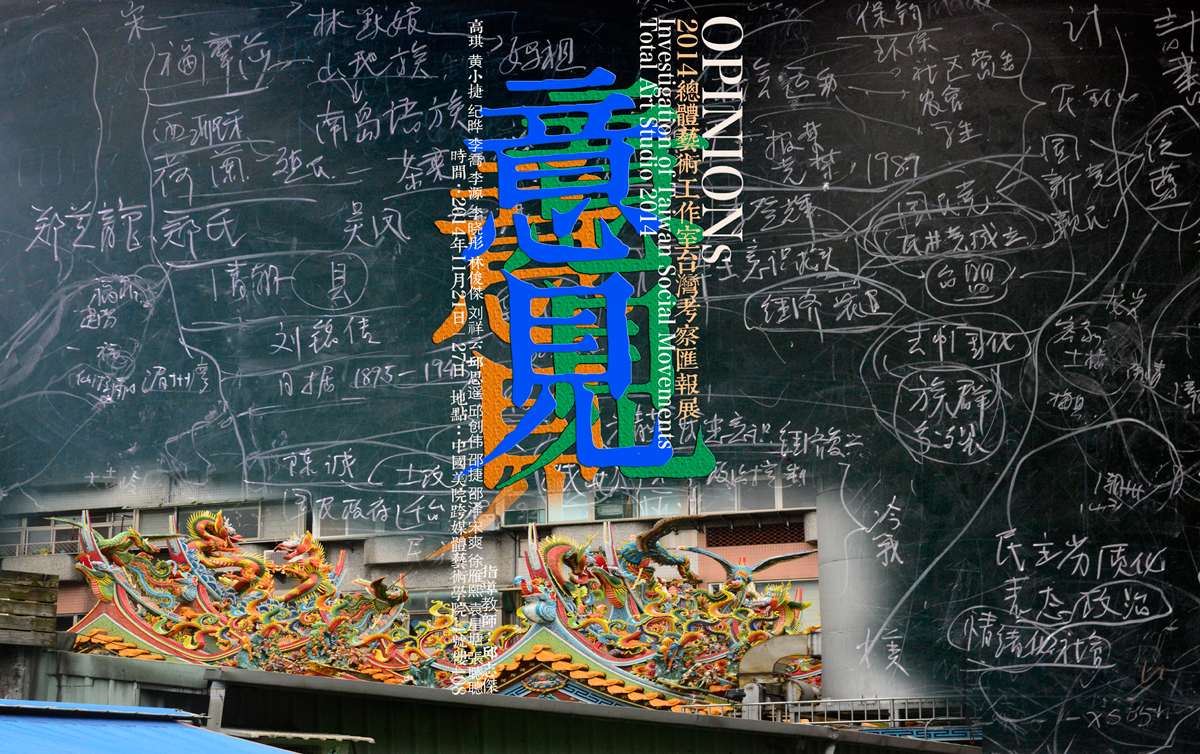 In 2014, the 65th Year of the People’s Republic of China, the year of Jia Wu in the Chinese traditional Lunar calendar, and the 103rd year of Republic of China, from October 9th to 24th, the teachers and students of the Total Art studio, the School of Inter-Media Arts, of the China Academy of Art, 25 people altogether, organized “The Freedom Walker” project to make a research expedition in Taiwan as tourists from the mainland.

During the tour, we contacted a large number of participants and researchers from all kinds of Taiwanese social movements. In Taipei, we met students who participated in “The Sun Flower Movement” and key figures of “The Little Theatre Movement”. We also visited the exact areas where an anti-nuclear power plant protest and a movement against the death penalty took place. In Danshui Town, we met the architects and eyewitnesses of “The Community Reconstruction Movement”, and the organizers of “The Nest Movement” which fought against increases in housing costs. In Taitung and Pingtung, we contacted the leaders and members of “The Original Resident Movement” directly. We met some artists from such local minorities as the Amis, Puyuma, and Payuan. During our visit to an old political prison on Green Island, the students were introduced to Cold War issues for the very first time. Soon after, we went to Kaohsiung, where we investigated the Cold War landscape.  Our investigation involved local residents and their memories of this land; we touched upon Taiwanese veterans’ issues and examined the immigrants’ community of Dachen Island. In Kinmen, we experienced the “psychological warfare” of the Cold War, and observed the post-Cold War tourism culture. On Oct. 24th, our team travelled from Kinmen back to Xiamen, to participate in the “Fujian-Taiwan Art Expo” that gathered video artists from both sides of the Taiwan Strait. On the 8th of November, we returned to Hangzhou to take part in “The New Love Story Dream” developed by Taiwanese artist Wu Mali on the banks of the West Lake.

Today, Taiwan is an arena of multiple opinions. Its historical background is intertwined with the very structure of its population. There are people who stand for union, and people who are against it; there are those who just want to make money by any means; “local” people (who are actually people from Fujian province); people from other provinces; people who used to live here; “turtle” people who have been abroad then returned; foreigners; businessmen; and of course, tourists from mainland. All of them carry their own beliefs and opinions. In a society divided into several groups, where arguing controversial opinions never ends, everyone is an advocate of their beliefs, or perhaps merely enslaved by them. The world we live in is a marketplace of opinions and a boxing ring for ideas; Taiwan represents this better than any place else. We used the exact areas of these social movements and memorial sites as a sort of mental thread, which we needed to tie together the history of political mind games. There are many different opinions within this framework, how are they related to each other? This question made us draw a “Map of Opinions”. There are some ideas and beliefs behind these opinions, and the development of these ideas is conditional on history. Why do the same ideas become source of many different opinions? Which came first, the ideas or the reality? How should an opinion be expressed after all? How does it promote itself, how does it legitimize itself? How do different opinions invalidate each other? How can different opinions change the minds of their opponents? How can the suppressed opinion rise from its ashes? How eras of greatness change the personal lives of people, their lives and deaths? What should be remembered, what is to be forgotten? How can a righteous spirit dwell in reason, when people choose to look out for themselves? What kind of historical narratives, election cultures, religions, and mass-media were incubated by all these influences?

We chose to go to Taibei before the Taiwan National Day, therefore we had a chance to observe the election campaign, and the “cooking oil” scandal. We devoured all sorts of information, with the same voracity that we did with the local seafood; not only have we seen the marks of storms on the sea stones, but the marks left behind by historical events. We spoke as close friends would, asked many questions and listened to all of the answers. We were moved by a mixture of feelings, laughing one moment and crying another. In the end, all our previous guesswork and prejudices were washed away by the waves of the surf, and blown away by the winds from the Pacific Ocean. Simultaneously, we brought our ideas about video art to Taiwan, our classes and discussions; how video can embody reality as an illusion, how it can express and remember, how narration and documentary uses local spaces, why individual creation gets away from industrial traditions, and so on.

In the end, we present you a theatre play of opinions. This play has its stage and scenery, but has no script; only a group of talented actors and one poor director. The dénouement of this play is still to come.